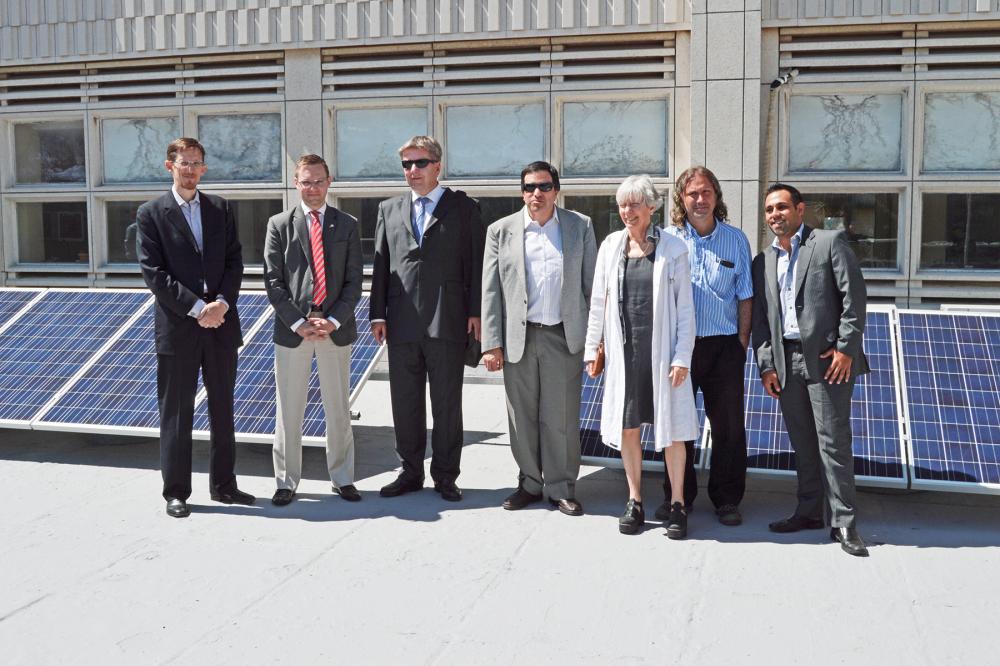 German company Spirea GmbH, together with its local partner ERGO SRL have announced the installation and connection of a pilot solar photovoltaic system of 2kWp for the Faculty of Engineering (FING) at the University of the Republic in Montevideo, Uruguay.

The project consists of the installation of 8 photovoltaic panels with micro inverters at rooftop of the Institute of Electrical Engineering, located in Parque Rodó. The system is connected to the network of UTE and will produce approximately 2800 kWh of electricity per year, contributing clean energy for use in the faculty.

Beyond a green source of electricity supply, the main objective of the project is to allow the students and researchers of FING perform experiments and tests with a photovoltaic system in daily operation. Power production exceeding consumption of the faculty building is not expected, but if any, it will be fed into the network of UTE in the framework of micro-generation introduced by Uruguayan power regulators.

The project is part of the worldwide “dena Renewable Energy Solutions Program” coordinated by Deutsche Energie-Agentur (dena) - the German Energy Agency - and co-financed by the German Federal Ministry for Economic Affairs and Energy (BMWi) within the “renewables – Made in Germany“ initiative. It is the official aim of the German government to make a significant contribution to international climate protection. Therefore, the government has been actively supporting the world-wide dissemination of cutting-edge German renewable energy technology and know-how since 2002. The transfer of renewable energy expertise, the promotion of foreign trade and the facilitation of international development cooperation are part of the initiative.

The German company Spirea GmbH, supported by dena, has chosen the Faculty of Engineering for this project because of its key role in shaping future generations of professionals in the renewable energy sector. As the faculty consists of the country most prestigious engineers, the Faculty of Engineering is also a key actor in the transformation of Uruguay’s energy matrix.

Dr. Utz Hoeser, Spirea Partner GmbH said: "It is an honor for our firm to work with the prestigious Faculty of Engineering who has showed strong interests and commitment in realizing this experimental PV system at the faculty building. Continuous supports from the faculty dean Prof. Dr. Simon, director of the Electrical Engineering Institute Prof. Dr. Silveira and project leader Mr. Adrian Santos made the project possible. The initial project idea was born from contact with the faculty alumni Lic. Enzo Melani and Lic. Mauro Melani, both are directors at company ERGO and active in the Uruguayan renewable energy sector."

About Spirea GmbH: Spirea Advisors is an independent cleantech consultant based in Berlin, Germany. The young boutique focuses on facilitating cleantech investment and cooperation around the globe. Since its establishment in 2011, Spirea has completed various successful projects across Asia, Europe and the Middle East. Spirea is the key implementation partner of the solar PV system at FING under the dena-RES-Project 2014/2015, and is positioned to play an active role in the Uruguayan cleantech market. www.spirea.de

About FING: The Faculty of Engineering of the University Republic (Universidad de la República) is the only public institution of higher education in engineering in Uruguay. Its aim is to train skilled professionals to meet the needs and demands of the industrial sector and contribute to the development of the society. This faculty was established on July 14, 1885 as Faculty of Mathematics and Associated Fields, and changed its name after the 1975 resolution by Minister of Education and Culture to the name by which we know it today. www.fing.edu.uy

About ERGO SRL: ERGO is a Company founded and managed by specialists in energy efficiency and renewable energies. In this field, ERGO is specialized in turnkey photovoltaic projects and assessing clients in electricity generation projects of all kinds. www.ergo.com.uy

About dena: The Deutsche Energie-Agentur (dena) - the German Energy Agency - is Germany's centre of expertise for energy efficiency, renewable energy sources and intelligent energy systems. dena's aim is to ensure that energy is used in both a national and international context as efficiently, safely and economically as possible with the least possible impact on climate. dena is working with stakeholders from the worlds of politics and business and from society at large to achieve this aim. Shareholders in dena are the Federal Republic of Germany, KfW Bankengruppe, Allianz SE, Deutsche Bank AG and DZ BANK AG. www.dena.de