renewable energy tampa How Tampa Can Make the Most Out of Renewable Energy Use?

Renewable energy – be it solar, wind, biomass or hydroelectric – provides a plethora of benefits to Tampa’s health, climate, people and economy. With its profuse sunshine throughout the year and other steady sources of alternative energy, the city can reap the maximum advantages in terms of improved public health resulting out of an eco-friendly way of lifeWhen it comes to renewable energy, Tampa can boast of having unique plus points. Enumerated below are some of the benefits: 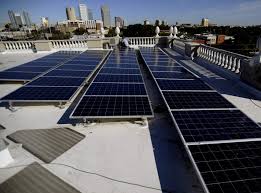 Under the Florida Renewable Energy Technologies and Energy Efficiency Act 2006, homeowners having photovoltaic systems installed can benefit in terms of tax credits. Customers who purchase solar heating equipment are eligible for a generous rebate of 4 dollars per watt with a limit of 20,000 dollars for domestic solar systems and a 100,000 dollar cap for publicly owned, commercial and private non-profit ones.

The water and air pollution created by fossil fuels such as coal or natural gas plants is associated with a number of health hazards including neurological damage, breathing problems, cancer, and heart ailments. Doing away with fossil fuels and using renewable energy can lessen early mortality and overall costs associated with healthcare.

Generation of electricity contributes to more than one-third of America’s greenhouse gas emissions, and the bulk is produced by coal-fired power plants. This results in the production of about 25 percent of the entire global warming emissions in the US. However, most sources of renewable energy in Tampa produce very little or no global warming hazards at all. Solar and wind energy doesn’t need water to operate, and therefore don’t contaminate water bodies. Neither do they damage supply by contending with clean drinking water systems and cultivation. Fossil fuels, on the contrary, can have an adverse impact on water resources. For instance, both natural gas drilling and coal mining can infect such sources.

Alternative energy use has the potential to provide cheap electricity that can stabilize costs to a considerable extent. For example, most solar organizations of the country install panels in consumers’ houses under a 20-year lease. Some of the leading companies do not even demand any upfront payment from the customers. Some companies even sell the power to the consumer at a locked-in rate, which is usually lower than the amount a household had been disbursing to a local power generation facility.

Solar plants in Florida can save consumers 178 million dollars per year. In fact, the costs pertaining to renewable energy technologies have dropped gradually, and are expected to decline more. The average cost of a solar panel has reduced about 60 percent since 2011. The cost of electricity generation from wind declined more than 20 percent between 2010 and 2012.

In contrast to fossil fuel technologies, which are primarily capital intensive and mechanized, the renewable energy sector in the bay area is more labor-intensive. This implies that employment opportunities from this industry are higher than from fossil fuels.

In fact, the renewable energy sector supports several jobs in the US. For instance, in 2011, industries associated with wind energy directly recruited 75,000 full-time employees in various jobs such as construction and turbine installation, project development, manufacturing, legal, financial, transportation and logistics, and consulting services.

It’s therefore no brainer that the time has come when we must shift our focus from fossil fuels to renewable energy. Tampa residents are already tapping it in a big way, thereby contributing towards a cleaner greener environment.