California Governor Jerry Brown has declared a state of emergency following a devastating oil pipeline spill along the unique Santa Barbara coast. The move will help free up resources which will help in the clean-up process – but experts say the local environment might never recover from this ecological disaster. It’s estimated that more than 400,000 litres of crude oil was spilled before the ruptured pipeline was discovered. Officials have estimated that around 80,000 litres of oil has reached the sea.

“This emergency proclamation cuts red tape and helps the state quickly mobilize all available resources,” said Governor Brown. “We will do everything necessary to protect California's coastline.” 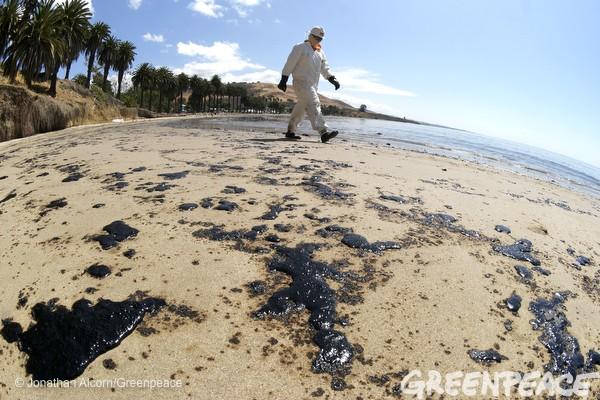 Workers outfitted in protective suits and helmets are on the beach, shoveling up contaminated mud and rocks into plastic bags. Photo credit: Greenpeace USA.

The ruptured pipeline, which is owned and operated by the Plains All-American pipeline company (PAAP), was built in the late 1980’s and the company claims it was thoroughly inspected in 2012 and that it underwent similar test about two weeks ago – although those test results had not yet been analysed, Al Jazeera reports. Environmentalists are saying that this accident shows, yet again, that oil companies are incapable of regulating themselves.

“Oil spills are never accidents,” said Annie Leonard, Executive Director of Greenpeace USA, in a statement. “They are the direct result of substandard oversight of fossil fuel companies who put their profits above human and environmental impacts.”

Kathryn Phillips, California director of environmental group Sierra Club, asked: “How many more signals do we need from the oil industry that public health and the environment aren't at the top of its list when it decides how much to invest in creating its products?”

“It's time we all demand better from this incredibly wealthy industry,” Phillips said. 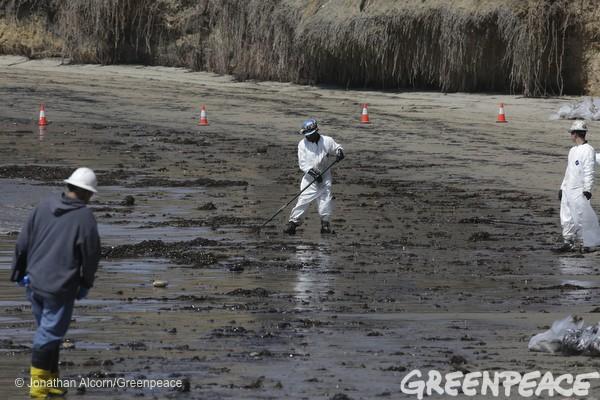 The pipeline company has said that they take full responsibility for the accident and that they will pay for all costs associated with this devastating oil spill.

“We apologise for the damage that has been done to the wildlife and to the environment and we’re very sorry for the disruption and inconvenience it has caused on the citizens and visitors to this area,” said PAAP’s boss Greg Armstrong.

Santa Barbara was the scene of a much bigger oil spill in 1969 which is said to have been responsible for launching the environmental movement in the US. The question is, will this oil spill change anything?