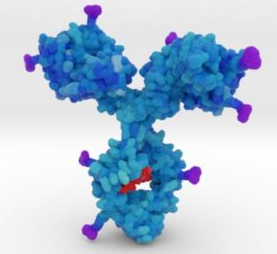 Antibody-drug conjugate (ADC) is a humanized or human monoclonal antibody that is conjugated to a highly cytotoxic small molecule (payload) through a chemical linker. It is a novel form of treatment and is used in cancer chemotherapy. This new antibody-based molecular platform can selectively deliver effective cytotoxic payloads to target cancer cells compared with traditional chemotherapy, thereby improving efficacy, reducing systemic toxicity, and having better pharmacokinetics (PK)/Pharmacodynamics (PD) and bio-distribution.

Driven by the success of Adcetris® and Kadcyla® approved by the FDA, this drug class is developing rapidly along with approximately 60 ADCs currently in clinical trials. In this article, we briefly reviewed the molecular aspects of each ADC component (antibody, payload, and linker), and then mainly discussed traditional and new technologies for successfully constructing clinically effective ADC coupling and linker chemistry. From the point of view of medicinal chemistry and pharmacology, current efforts in conjugation and connection chemistry will provide deeper insights into the molecular design and strategies of clinically effective ADCs. The development of site-specific conjugation methods for the construction of homogeneous ADCs, especially ways to improve ADC design will open the way for new cancer treatment methods.

In the past half century, with the development of chemotherapy, the treatment of cancer has improved significantly. In addition to surgical resection, radiotherapy, targeted therapy using small molecules or monoclonal antibodies, and recent immunotherapy, chemotherapy using cytotoxic agents is the main treatment option. Chemotherapy is perfected by screening and developing small molecules that can selectively cause cancer cell death by inhibiting microtubule function, DNA synthesis or protein function. Although chemotherapy has achieved great success in the treatment of cancer, especially leukemia, there are still difficult problems, such as the development of drug resistance mechanisms. Serious adverse reactions caused by off-target cytotoxicity may worsen the patient’s quality of life, leading to drug withdrawal. This fact makes clinicians and medicinal chemists reluctant to pursue more potent cytotoxic drugs to treat cancer. In this case, the use of highly cytotoxic agents combined with cell targeting molecules has become a potential clinical strategy. In particular, antibody-drug conjugates (ADC), humanized or human monoclonal antibodies conjugated to cytotoxic small molecules via chemical linkers, may undergo fundamental changes in the design and administration of cancer chemotherapy. The platform can target cancer cells and selectively deliver highly cytotoxic drugs, thereby creating a broad therapeutic Indeed, successful clinical results using ADCs have inspired scientists in the biomedical research community to further advance this new platform to the next generation of cancer treatments. In this article, we reviewed the molecular aspects of ADCs, the latest developments in ADCs that have been successfully used in clinical applications, and the coupling and connection technologies used to successfully construct ADCs.

In 1913, German physician and scientist Paul Ehrlich first proposed the concept of selectively delivering toxic drugs to target cells. Forty-five years later, his targeted therapy concept was proved for the first time in the form of ADC, where methotrexate was conjugated with a leukemia cell targeting antibody. In early research, polyclonal antibodies were the main targeting agent. In 1983, the first use of anti-carcinoembryonic antigen antibody-vinblastine conjugate for ADC human clinical trials, and reported promising results. Advances in antibody engineering technology, including the production of humanized antibodies, have promoted ADC research. The first-generation ADC consisting of chimeric or humanized antibodies was tested in the 1990s. Finally, further major efforts on practical therapies led to the FDA-approved ADC: Gimumab ozogamicin (Mylotarg®) for CD33-positive acute myeloid leukemia in 2000, and for CD30-positive relapsed or refractory Hodgkin’s lymphoma in 2011 brentuximab vedotin (Adcetris®). Anaplastic large cell lymphoma and trastuzumab Emtansine (Kadcyla®) were used in HER2-positive breast cancer in 2013. However, Mylotarg® was withdrawn from the market in 2010 due to lack of clinical benefit and lethal high toxicity compared to standard chemotherapy. Despite this setback, ADC technology is still developing rapidly, and about 60 ADCs are currently in clinical trials. In addition to immunotherapy using checkpoint inhibitors, this emerging chemotherapeutic molecular platform is expected to significantly increase its market share as one of its largest markets. The most effective anti-cancer therapy in the near future.

The structure and mechanism of ADC

Another important consideration is the limited number of payload molecules that can be effectively delivered to target cells. If it is assumed that the efficiency of each step in the ADC mechanism is 50% (biodistribution, binding to antigen, internalization, release of payload, intracellular stability of payload, and binding of payload to target), then only 1.56% administered drug molecules can enter the target cell. In fact, the estimated actual intake is much lower than this assumption (less than 0.01% per gram of tumor injection). Therefore, in order to maximize the therapeutic efficiency of using ADC, the cytotoxicity of the payload must be high enough to effectively eradicate target cells, and ideally should be in the picomolar range. It is very important to choose important toxic drugs as payloads, and ideal drugs have inherent selectivity to target cancer cells. Certain types of non-cancer cells may be able to internalize ADC through non-specific pinocytosis or crystallizable fragmentation (Fc) region receptor-mediated endocytosis. In addition, the payload can be released when it degrades into circulating blood. Therefore, the payload is mainly selected based on the above considerations; anti-mitotic agents are usually less toxic to non-cancer cells than to cancer cells, and are payloads that are mainly used in FDA-approved ADC and ADC clinical trials. In addition to calicheamicin (for Mylotarg®), auristatin (for Adcetris®) and maytansinoid (for Kadcyla®), a new type of highly effective anti-mitotic compound has been explored for ADC loading: Carmycin, pyrrolobenzodiazepine dimer (PBD) mannosides, mannosins, and tubulolysin analogs are such examples.

To be continued in Part II…