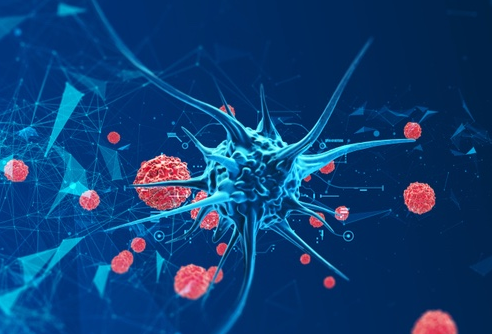 Oncolytic virus (OV) is a kind of natural or genetically modified virus that can specifically infect and kill tumor cells without causing too many harmful effects on normal cells. Initially, the world authoritative medical journal TheLancet reported that influenza viruses will cause tumors in patients to regress, resulting in the oncolytic virus, and then researchers around the world have carried out a series of studies on this, and now there are more than 160 different oncolytic viruses preclinical research and clinical trials are underway. However, due to the strong immunogenicity of oncolytic viruses, when injected into the body intravenously, it will trigger the body to produce different degrees of immune responses, which will quickly clear the virus by the body. In addition, the tumor targeting of oncolytic viruses is limited, resulting in their inability to specifically reach the tumor site through the blood circulation, which seriously affects the tumor suppressive effect of oncolytic viruses, and produces different degrees of adverse reactions. In order to solve the above drawbacks, researchers construct different types of vectors to load oncolytic viruses to block their immunogenicity, extend their blood circulation time, and further combine oncolytic viruses with chemotherapy, radiotherapy, immunotherapy, photodynamic therapy, photothermal therapy and other combination of treatment means to improve its tumor treatment effect.

Construction of oncolytic virus vectors based on biological materials

Biomaterials can be used to load oncolytic viruses to achieve the purpose of blocking viral immunogenicity and achieving targeted delivery of tumors. The biomaterials currently used for oncolytic virus loading mainly include liposomes, cells or extracellular vesicles.

Cationic liposomes constructed with (2,3-dioleoyl-propyl)-trimethylamine (2,3-dioleoy-loxy-propy)-trimethylammonium (DOTAP) encapsulate oncolytic adenovirus, which can block the surface of adenovirus, reduces its immunogenicity, and allows the oncolytic adenovirus to enter the Coxsackie virus-adenovirus receptor (CAR) low-expressing tumor cells to replicate through endocytosis. However, after entering the body, cationic liposomes will adsorb some negatively charged serum proteins, causing the liposome nanoparticles to agglomerate, which seriously affects their access to the tumor site through the enhanced permeability and retention effect (EPR effect). Anionic liposomes are endogenous components of eukaryotic cell membranes. Compared with cationic liposomes, they have the advantages of low toxicity and low immunogenicity. They have been widely used in recent years. At the same time, there are studies that claim that anionic liposomes can undergo a phase change under the action of calcium ions, which is conducive to the liposomes encapsulating oncolytic viruses through electrostatic adsorption. PEG (polyethylene glycol) anionic liposome based on matrix metalloproteinase and substrate peptide/cholesterol, successfully encapsulated oncolytic adenovirus, its research team confirmed the high gene expression efficiency of the material in vitro, while the safety of the material was confirmed by C57BL/6N mice.

Commonly used cell carriers such as stem cells, lymphocytes, and tumor-related cells have good tumor chemotaxis. Coupling the oncolytic virus on the surface of the cell or loading it into the cell can not only effectively block the immunogenicity of the virus, but also improve its targeted enrichment effect on tumors. Studies showed that stem cells have a tendency to affect the tumor microenvironment and have a low immunogenicity. On this basis, JOSIAH and others used adipose-derived stem cell (ADSC) from healthy mice for the first time to load myxoma oncolytic virus, then it was injected into tumor-bearing mice to achieve the targeted delivery of the virus to glioma. In addition, some researchers used mesenchymal stem cell (MSC) expressing Newcastle discase virus (NDV). The results found that in vitro MSC can not only improve the targeting of NDV to glioma cells, but also the secretion of TNF-related apoptosis-inducing ligand (TRAIL), which significantly improve the oncolytic effect of the virus on glioma stem cells. In addition, there are studies used immature dendritic cells (iDC) and lymphokine-activated killer cells (LAK) to coordinately transport reovirus, which killed ovarian cancer cells in vitro by resisting neutralizing antibodies in patients' ascites. LANKOV et al. reported for the first time that using tumor-associated macrophages as a carrier of oncolytic measles virus to delivery mice ovarian cancer, this strategy allows the virus to evade the neutralization of antibodies and complement, and then the virus can be transferred to tumor cells through in situ cell fusion.

Tumor extracellular vesicles with a similar membrane structure to tumor cells can also be used as an ideal carrier for oncolytic viruses. Due to their homologous targeting, this system can also achieve tumor-targeted delivery of oncolytic viruses. A study used tumor cell-derived microparticles (T-MP) to deliver oncolytic adenovirus, and the constructed nanoparticles (oncolytic adenovirus-microparticle (OA-MP) can not only make the virus escape the body's resistance viral effect, and can make the oncolytic virus enter into the nucleus of tumor cells or tumor stem cells to self-replicate without relying on the receptor-mediated infection. Therefore, this system is also more effective for tumor cells with low CAR receptor expression, such as human chronic myeloid leukemia cells (K562 cells).

Construction of oncolytic virus vectors based on non-biological materials

Due to the ease of preparation and good biocompatibility of high molecular polymers, they have the advantages of being metabolizable and degradable in the body, which has attracted extensive attention in the medical field, such as drug loading, delivery and release. Since most viral proteins are negatively charged under physiological conditions, many cationic polymer complexes can be adsorbed on the virus surface by electrostatic action. TESFAY et al. encapsulated FSL-PEG2000 on the surface of vesicular stomatitis virus (VSV) through electrostatic adsorption; therefore, the virus surface protein was effectively blocked, thereby effectively reducing the antibody neutralization effect in mouse serum and the effect of mice liver and spleen on virus storage. However, because virus infection depends on the specific recognition of its surface proteins and host cell surface receptors, and the coating of FSL-PEG2000 affects the recognition and infection of viruses and tumor cells, the follow-up research aims to find some controllable polymer, which allows the oncolytic virus to be released in a targeted manner when it reaches the host cell without affecting its ability to infect. Environmental stimuli-responsive polymer can respond to small changes in the outside world, so this feature can be used to achieve on-site release of oncolytic viruses. CHOI et al. used physical adsorption method to wrap the pH-sensitive polymer (mPEG-b-pHis) on the surface of adenovirus to prepare a stable oncolytic adenovirus complex, which not only reduces the immune response of adenovirus, but also release the oncolytic virus under the slight acid environment of the tumor, and then restore the virus to the tumor cells. Based on the same principle as above, LEE et al. utilized biodegradable macromolecular polymer cholic acid coupled polyvinylamide [bileacid-conjugated Poly(ethylencimine), DA3] encapsulates adenovirus, and the constructed viral nanocomposite particles (Ad/DA3) can also effectively increase the effect of virus in vitro to a variety of tumor cells.

To be continued in Part Two…