Proteolysis targeting chimeras (PROTAC) is currently a very hot drug development technology and is considered by the industry as a star of small molecule drug development. One end of this type of bifunctional small molecule is a ligand that targets the target protein, and the other end is a ligand that binds to E3 ubiquitin ligase, which is then connected by a linker of a certain length. In this way, the target protein and E3 ubiquitin ligase can be brought closer together, so that the target protein is labeled with ubiquitin, and then degraded by the ubiquitin-proteasome pathway.

The main advantages are as follows: 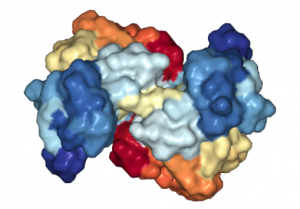 The development history of PROTAC

The technology has been developing for 20 years. Proteinix researchers submitted a patent application for the degradation of specific proteins using small molecule compounds based on the ubiquitin mechanism in 1999. Two years later, Dr. CraigCrews and Dr. Raymond Deshaies designed a series of bifunctional small molecules based on peptide compounds to induce the degradation of methionine peptidase 2 (MetAP-2), and formally proposed the concept of PROTAC. However, because these compounds, which are based on large and bulky peptides, are difficult to connect to cells, the first generation of PROTACs failed. Until 2008, the Crews team designed the second-generation PROTACs that can be used to degrade the androgen receptor (AR) based on E3's ubiquitin protein ligase MDM2. In 2015, the Crews team designed a new generation of PROTACs based on the new E3 ubiquitin ligase VHL and CRBN ligands to reduce the level of multiple proteins by more than 90%. It was also this year that James Bradner, head of research and development at Novartis, published a new generation of PROTAC molecules based on thalidomide analogues in Science, thus detonating the entire field. In 2013, Crews established Arvinas, the world's first company to develop drugs using PROTAC technology.

What is optimistic about this technology is that the world's first PROTAC drug ARV-110 developed by the company is intended to be used for the treatment of castration-resistant prostate cancer. It has entered the stage of clinical phase I research. The initial data of clinical phase I indicate that ARV -110 has good oral availability and good safety and tolerability.

In developed Europe and the United States, mCRPC is the second most frequent malignant tumor among men, and it has also been a difficult treatment and a hot spot in clinical research in the field of prostate cancer. At present, the first-line treatment drugs mainly targeting the androgen receptor target (AR) include abiraterone and enzalutamide. In addition, in March 2020, the American Society of Clinical Oncology Genitourinary System Cancer Symposium (ASCO-GU2020) discussed that for patients with mCRPC carrying DNA damage repair mutations (DDM), Abiraterone is more effective than Zalu for first-line treatment. Amine has a tendency to have better therapeutic effects. The use of androgen receptor targeting (ARAT) drugs (Abiraterone or Enzalutamide) for first-line treatment of mCRPC patients will result in more survival benefits for patients, especially for intraductal carcinoma of the prostate (IDC-P). However, for patients with AR gene or gene enhancer amplification or AR point mutations, the current first-line treatment drugs are less effective, and 15-25% of patients do not respond to second-generation hormone therapy such as abiraterone and enzalutamide. Most patients with responsiveness will eventually develop severe drug resistance, leading to a poor prognosis. The PRAOTC molecule ARV-110 targeting androgen receptor degradation currently shows excellent activity in clinical models of AR mutation and overexpression.

The mechanism of ARV-110

To overcome these challenges and improve current treatment options, ARV-110 uses the ubiquitin-protease system to degrade the AR protein that plays a key role in the development of prostate cancer. It is different from traditional inhibitors and does not need to be inhibited by "occupying" receptors. In addition, the PROTAC drug can also work repeatedly to degrade the newly transcribed target protein, so it can overcome the increase in target protein expression and mutations in the target protein. The specific molecular structure has not yet been announced.

In preclinical studies, ARV-110 has shown promising activity as a targeted degradation agent for AR. In a model sensitive to enzalutamide, ARV-110 showed a reduction in prostate-specific antigen (PSA) similar to enzalutamide, and the dose was lower. In the model of enzalutamide resistance, ARV-110 can significantly inhibit tumor growth.

On May 29, 2019, the FDA approved a phase I, open-label, dose-escalation clinical phase I trial to evaluate ARV in patients with metastatic castration-resistant prostate cancer who had previously received at least two systemic therapies -110 safety, tolerability, pharmacokinetics and pharmacodynamics. The trial is expected to enroll 36 patients, 18 years of age or older and have received at least two approved CRPC systemic therapies (at least one must be abiraterone or enzalutamide). Patients with progressive mCRPC must undergo ADT (prostate cancer androgen deprivation therapy) or orchiectomy.

On May 13, 2020, the latest safety-related data and early efficacy data of the Phase I clinical trial (NCT03888612) were published in the abstract of the American Society of Clinical Oncology (ASCO). To determine the maximum tolerated dose (MTD) and recommended phase 2 dose (RP2D) of ARV-110, mCRPC patients who have previously received at least 2 treatment regimens (including enzalutamide and/or abiraterone) are taken orally once daily ARV-110. Endpoints include dose-limiting toxicity (DLT), adverse events (AEs), pharmacokinetics (PK), biomarkers (eg AR mutation analysis), RECIST (evaluation criteria for the efficacy of solid tumors) and PSA (prostate specific antigen) responses. As of January 2020, there were 18 patients participating in the trial. The doses were divided into 4 groups, namely 35 mg (3 cases), 70 mg (4 cases), 140 mg (8 cases), and 280 mg (3 cases). Among them, 12 patients were previously treated with enzalutamide and abiraterone; 14 patients had received chemotherapy. One of the 18 patients had grade 4 (Gr) dose-limiting toxicity (DLT, 280 mg) while taking the cholesterol drug Rosuvastatin (DLT, 280 mg) and hepatic transaminase AST/ALT increased, followed by acute renal failure. The second patient had grade 3 (Gr) dose-limiting toxicity when taking the cholesterol drug rosuvastatin and hepatic transaminase AST/ALT also increased. After stopping rosuvastatin, ARV-110 treatment can be continued. In these two patients, in view of the significant increase in rosuvastatin plasma concentration at the same time as AST/ALT, the use of rosuvastatin and ARV-110 should be banned at the same time. In addition, there are no other relevant grade 3/4 adverse events (AE) reported. 15 patients underwent PSA response assessment (not including 1 patient who stopped treatment due to disease progression and 2 patients who had just started treatment). Eight of these patients had an initial dose of 140 mg. Two patients in the 140 mg dose group had a PSA reduction of greater than 50%. The two groups had previously received enzalutamide and abiraterone, chemotherapy, bicalutamide and radium 223, and other treatment options. One patient had 2 AR mutations known to cause enzalutamide resistance. Another patient also received an unconfirmed partial RECIST response (confirmation test to be determined). At the time of data cut-off, patients undergoing longer cycles (8 weeks and more than 21 weeks) of treatment trials are still ongoing.

The latest clinical trial data shows that ARV-110 has acceptable safety. The maximum tolerated dose (MTD) has not been established and the phase 2 recommended dose (RP2D) is still being tested. In addition, for patients receiving enzalutamide/abiraterone treatment, ARV-110 has shown anti-tumor activity, of which 2 patients have been confirmed by PSA response, and 1 of them is related to tumor reduction.