BsTCEs bind to CD3ε in the CD3ε-TCR complex and activate T cells without antigen presentation. Although this mechanism was proven to be highly effective in the laboratory by co-culture experiments, it caused rapid uncontrolled cytokine release syndrome (CRS), including the earliest marketed CD3×EpCAM bsTCE catumaxomab, via the Fc segment binding to FCγR expressing Kupffer cells in the liver and causes uncontrolled hepatotoxicity. Targeting bsTCEs by CD3 requires complete inhibition of Fc-mediated effector function to reduce non-target toxicity and maximize therapeutic effects. 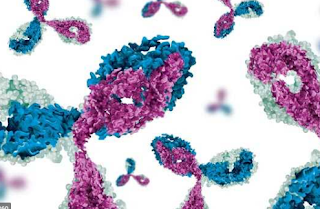 The activity of some bsTCE is positively correlated with the expression level of tumor targets, such as CEA, CD33, HER2. There are also some no significant correlations with expression levels, such as EPHA2, PSMA. However, there is also a minimum required tumor target expression, such as RG6106 requires at least 50 bsTCE binds to the myeloma surface FCRL5, while Roche cibisatamab requires 10,000 CEA in combination with bsTCE to be activated.

Bivalent tumor targets can increase drug binding activity and enhance drug efficacy. Some tetravalent bsTCEs are under development, including Adaptir and TandAb, which have two CD3 and two TAA binding units. In addition, trivalent bsTCEs are under development, in which CD3 is monovalent and TAA is bivalent. For example, RG6026 (also known as RO7082859; Roche).

In order to improve the safety of the combined targeting of PD-1 and CTLA 4, an Fc-silencing bsAb, a high affinity inhibition of PD-1, and a low affinity binding inhibition of CTLA 4 were designed to inhibit the PD-1 pathway. This design is beneficial for inhibiting PD-1-CTLA 4 double positive tumor infiltrating lymphocytes, and at the same time reducing the binding of CTLA 4 expressing peripheral T cells, thereby providing better safety.

Currently, the safety and early efficacy of the four PD-1×CTLA4 bsAbs are being evaluated in early clinical trials. The concept of blocking two immunological checkpoint inhibitors is also clinically used for other target combinations, such as PD-1 x LAG 3, PD-1 x TIM3, and PD-L1 x CTLA 4.

Targeting inhibition of tumor receptor tyrosine kinases (RTKs) such as EGFR and HER 2 is a successful anticancer approach, but the development of drug resistance is one of the major limiting factors for such treatment. Drug resistance typically involves up-regulation of other RTKs that bypass specific receptor inhibition to activate parallel signaling pathways. For example, in the tyrosine protein kinase MET pathway, non-small cell lung cancer (NSCLC) tumors are resistant to EGFR tyrosine kinase inhibitors.

JNJ-61186372 (Janssen Pharmaceuticals) is an EGFR x MET bsA that blocks EGFR and MET signaling by inhibiting ligand-induced activation and receptor degradation by cFAE. JNJ-61186372 has antibody-dependent cytotoxic activity (ADCC) which is produced by Fc containing low fucose. The glycotypic analysis in the quality control of such bispecific antibodies should be noted.

In contrast to blocking pathogenic signals with inhibitory antibodies, some therapeutic concepts require receptor signals to be activated by agonistic antibodies. Specific bsAbs are also particularly suitable for activating multi-component receptor complexes because they require simultaneous binding of the receptor and the co-receptor to activate. Activation of the fibroblast growth factor 21 (FGF 21) pathway has been reported to improve obesity and diabetes. However, the pharmacokinetic properties of recombinant FGF21 are poor, and chronic treatment has a risk of adverse reactions. Thus, the agonist bFKB8488A (Roche) was designed to activate this metabolic pathway by selectively targeting the fibroblast growth factor receptor 1C (FGFR1C)-β-Klotho (KLB) receptor complex. KLB is selectively expressed in liver, fat, and pancreatic tissues, while FGFR1C is widely distributed in liver, fat, and pancreatic tissues. Thus, co-targeting of these receptors may limit signal activation to only tissues that co-express KLB and FGFR1C and limit the adverse consequences of extensive FGFR activation, such as induction of cell proliferation. Preliminary results from an ongoing human first trial showed an improvement in cardiac metabolism in obese patients with insulin resistance.

Sampi and his colleagues began producing a bsAb to replace FVIII as a potential treatment for hemophilia A to prevent bleeding from FVIII dysfunction. The role of bsAb is to mimic the activated form of FVIII, FVIIIa, which binds FX and FIXa to enhance the catalytic activity of FIXa. In a wide range of screening efforts, a dual-characteristic antibody called AE 910 or emicizumab was finally selected and finally approved by the FDA for routine prevention to reduce bleeding in patients with hemophilia A using FVIII inhibitors. Further approval in October 2018 also included the use of emicizumab for prevention in patients without FVIII inhibitors. Emicizumab was first approved in Europe in March 2018.

The first target-specific transport of a second specific target using the bsAb is referred to as a "piggyback transport" or "hijacking" method for accessing a restricted cell chamber. Raso and colleagues described the first case of the use of hijacking concept-specific transport proteins, which linked bispecific receptors to ricin A, mediating toxin internalization and toxicity. A recent example is the hijacking of the transferrin transport pathway to cross the blood-brain barrier and enter the immune-immunized brain region. The researchers targeted the transferrin receptor (Tfr) by using a binding arm of the bsAb, and the second binding arm carries β-secretase 1 (BACE 1), which transports BACE1 into the brain, and TfR×BACE 1 bsAb can reduce amyloid (Aβ, Aβ) peptide levels in brain tissue and cerebrospinal fluid.